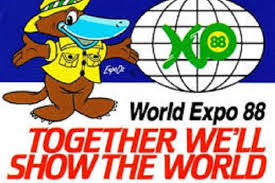 With its pavillions, food, artworks, entertainment and atmosphere, World Expo ‘88 became an iconic destination and worked its way into the hearts of many – more than 18 million visitors in fact! And 30 years ago this October, Brisbanites and their visitors bade farewell to Expo ‘88, saying goodbye to one fabulous party!

The idea for the six-month expo in Brisbane came from Jubilee client and former architect James `Jim’ Maccormick MBE OAM after he designed the Australian pavillions at the 1967 expo in Montreal, the 1970 expo in Osaka and the 1974 expo in Washington, USA. According to an ABC Radio report in April Jim, now 92, felt very proud of the opportunity he was given and would love to do it all again.
“It was a very exciting time,’’ Mr Maccormick said for the ABC Radio report. “What it achieved is it brought people to a realisation that their city was a beautiful city internationally admired by so many people. “We felt we achieved the impossible. We proved we could do it.’’

Expo ’88 facts include:
• The expo across 40ha where South Bank now lies cost $625 million to stage.
• The expo averaged 100,000 visitors a day, the highest day of attendance being 184,000 visitors on October 29, 1988 – the last day before the closing ceremony. There were 18,574,476 visits to expo – more than Australia’s population in 1988.
• Expo ‘88 attracted some 100 pavilions from 52 governments, of which 36 were international, and numerous corporate participants.
• The theme was Leisure in the Age of Technology. Throughout the six months two official logos were used – the Globe Boomerang and the Sun-sail.
• Expo ’88 managed to pay for itself many times over with no public debt or liabilities – reversing a trend that had occurred in previous World Expositions.
• The closing ceremony fireworks was the longest display in Australian history.
• Expo ‘88 featured numerous entertainment acts daily including street theatre comics, clowns, Australian bands, parades, laser shows, and comedy shows.
• The light from the 88-metre Expo Tower and Light Beacon (Sky Needle) could be seen 60km away.
• The Queensland Pavilion hosted the Expo Monorail.
• World Expo ’88 was a virtual open-air sculpture garden, having one of the largest and most prestigious sculpture collections in Australia. It included the humorous whimsy of the popular Human Factor plaster-of-paris still-life figures in their various poses.

Expo ‘88 highlights include:
• Her Majesty Queen Elizabeth II officially opened the exposition after noting her great-grandmother’s important role in opening the World Expo at the Hyde Park, London in 1851.
• Visitors received stamps in Expo ‘88 passports upon entering pavilions.
• Visitors had a choice of more than 50 different restaurants showcasing flavours from all over the world. Some of these such as the Munich Festhaus, the Picasso Spanish restaurant and the Britannia Inn remained part of Brisbane’s culinary scene for many years after.
• Tickets included entry to an amusement fair on the same site.
• The most popular pavilion was New Zealand with its animated Footrot Flats show and glow worm cave followed by Australia with its special effects Dreamtime Theatre; Queensland with its popular 180-metre long people mover ride through Queensland of the present and the future; Japan with its Japan Pond and Garden and hi-tech displays; Switzerland with its artificial snow ski slope and cable car ride; and Nepal with its three-level hand-crafted Nepal Peace Pagoda.

At the end of Expo ’88, the site was intended to become a permanent theme park but later became the site for the Brisbane Exhibition and Convention Centre and South Bank. Today, the Nepalese Peace Pagoda at South Bank is the only Pavilion from World Expo ‘88 that remains. The Japan Pond and Garden from the Japanese Pavilion was gifted to Brisbane and was relocated to the Mount Coot-tha Botanic Gardens. The Queensland Pavilion was purchased by Gateway Baptist Church, and now stands on its Mackenzie premises.