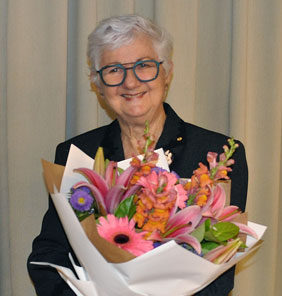 Dr Hinwood spoke about her start in sculpting after working as an artist painting models at the Queensland Natural History Museum. Her curiosity about the sculpting process of the peices she was working on sparked an exceptional career of more than 40 years. In that time she has created hundreds of sculptures for educational institutions, churches, governments, corporations as well as public and private collections.

In 1976 Dr Hinwood started carving grotesques at the University of Queensland’s Great Court, since designing and creating more than 300 subjects for the institution. Her works also can be found in the Roma Street Parklands, the Mt Coot-tha Botanic Gardens, the Queensland Performing Arts Complex, and as far away as the Australian Stockman’s Hall of Fame, Parliament House and overseas.

Dr Hinwood also has been widely recognised for her work with the Sir Winston Churchill Memorial Fellowship (1986) and Membership in the General Division of The Order of Australia (2006) amongst many other exultations.

Also at the AGM were reports by Management Committee president Dr Judy Salecich and director Shaun Riley. Both spoke about highlights during the previous financial year including the introduction of the Australian Community Care Outcomes Measure (ACCOM) which enables Jubilee to collect client and coordinator data in order the measure the quality and outcomes of our service. Changes to services, results of our annual surveys, the success of our Stay Standing program and public forums also were highlighted.