Want to know more about dementia?

Want to know more about dementia?

Dementia affects thinking, behaviour and the ability to perform everyday tasks. Brain function is affected enough to interfere with the person’s normal social or working life. Dementia can happen to anybody, but it is more common after the age of 65 years. People in their 40s and 50s can also have dementia. The most common types of dementia are Alzheimer’s disease, Vascular dementia, Parkinson’s disease, Dementia with Lewy bodies, Fronto Temporal Lobar Degeneration (FTLD), Huntington’s disease, Alcohol related dementia (Korsakoff’s syndrome) and Creutzfeldt-Jacob disease.

So what do you do if you suspect your loved one has dementia?

Wicking Dementia Research and Education Centre, which is part of the University of Tasmania’s Faculty of Health have developed a free online course, which goes for three months. It attracted more than 22,000 enrolments in 2015 and more than 70,000 people from around the world have participated over the last three years.

The MOOC model is a modern, online form of education, and Understanding Dementia has no assignments or exams and an emphasis on interaction through mediums including discussion boards.

The course is divided into three sections: ‘The Brain’, ‘The Disease’ and ‘The Person’.

“We were a bit worried that all the brain science would switch people off, but it was actually quite to the contrary, people actually found they learnt a lot from that,” Professor Vickers, Wicking Centre co-director, said.

While some university courses seem to take up huge portions of time, the Understanding Dementia course expectations require students to dedicate about three hours a week to the course. Pupils that complete the MOOC’s three units can request a certificate of completion. Despite no formal assessments, students can gage their knowledge through weekly quizzes. The accessible course generates interest in a wide range of students, including health professionals and policy makers, community and residential support staff, people interested in dementia, and people in the early stages of the disease.

“At the moment we don’t teach enough about it [generally], even in our own health courses, and it’s sort of a growing phenomenon as well, people want to know more about it,” Professor Vickers said.

The new MOOC was launched on Wednesday June 1, and Professor Vickers said it was a practical, informative way for people to learn how they could prevent dementia for themselves.

Professor Vickers said it had recently been determined that about 30 per cent of dementia cases could be prevented.

If you would like some help with your loved one. We train our Support Workers on how to help manage chronic diseases so feel free to call 07 3871 3220 or email us.

What is continence management?

Bladder and bowel control problems affect one in four Australians, men and women, of any age, yet most people don’t seek help.

Our Coordinators attended a workshop last month dedicated to this subject and had access to a large range of new products and information that will be useful to clients and carers as well as current products on the government funded schemes.

We may be able to help you or your loved one to get access to continence aids. Getting help for this will empower you as experts are there to help you manage this in order to allow you to continue your life without worrying about it.

Give your Coordinator a call on 07 3871 3220 or for free confidential advice from continence nurse advisors phone the National Continence Helpline on 1800 33 00 66.

Mandatory training for all staff – update

We do annual mandatory training four times a year. Staff attend one of these sessions in order to be up to date with the current best practice for our industry. We provide our staff with this training so that we can offer the highest quality of support in the services that we deliver. 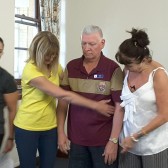 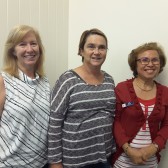 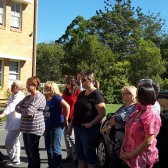 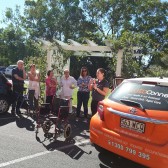 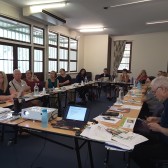 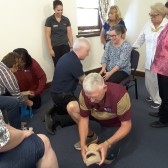 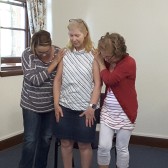 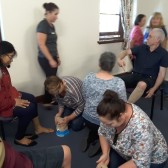 Are you steady on your feet? How to prevent falls!

We’ve just wrapped up our June Stay Standing Program, an educational 8 week program on how to avoid falls as we grow older. It is Australia’s only national quality accredited falls prevention program.

Did you know that one out of five falls causes a serious injury such as broken bones or a head injury with the Queensland Ambulance Service providing 22,744 attendances in just one year to adults aged 65 years and older who had fallen, with more attendances in the cooler months (May to July). The rate of attendance increased with age, with the highest rate being for adults aged 85 years and over. Most attendances were inside private residences (56%), followed by nursing homes (24%).*

We can help you reduce the risk of falls. It is easier to Stay Standing when you know how. This program is a mixture of education with highly skilled medical and Allied Health professionals as well as exercises.

The ladies from our latest course, pictured below, found that it strengthened their legs and helped their walking. They also learnt at least one useful tip from every professional talk, helping them to prevent falls in the future.

The morning teas were a great hit for the social aspect and Valery is now balancing with her eyes closed, something she never thought she would be able to do.

If you would like to join our fantastic Stay Standing facilitators Rossana and Minky this month, please call Sandy, Assistant Coordinator, on 07 3871 3220.